What is the Stratified Systems Theory (SST)?

A systematic and scientific approach to work complexity and management

Elliott Jaques proposed the Stratified Systems Theory (SST) based on his experience in organisational design since the 1950s. The SST identifies seven strata of work based on decision-making complexity measured in terms of the time span of the work involved. Focused on fair and equitable remuneration, Jaques discovered that people naturally agreed with pay based on the time-span of discretion which he also refers to as the by-when (or how long the employee’s longest task takes) and used this to measure the complexity of the work.

The associated Requisite Organisation (RO) approach, a triple bottom line business management methodology, was conceptualised based on SST research of work complexity and human capability. RO can be described as a set of guidelines or rules combined with a structure (SST) that aims to improve organisational effectiveness.

According to SST advocates, RO was introduced as one of the first measurable, systematic and scientific approaches to management. It revolves around the time-span of discretion as an objective measure of job complexity. RO also classifies people in terms of their natural capability to effectively deal with tasks of a certain level of complexity or time-span.

Jaques’ work has been interpreted, adapted and reformulated often and the development of the theory continues. Some of the associated models include an eighth level and some have reduced the number of levels. The roles and complexity terms are also linked differently to the levels by certain theorists. Alternative contributions in this field include Stafford Beer’s Viable Systems Model (VSM), Checkland’s Human Activity Systems (HAS), Hoebeke’s Domains of Work and Prinsloo’s Information Processing Model (IPM). These various approaches cause some discrepancies in articles and research.

Below is a graph that captures the essence of the levels as defined by the SST. Regarding the SST levels, it is important to note that:

The SST levels of work, time frames and domains of meaning

Complexity changes through the levels due to changes in time-span. How the work requirements change is also described by Jaques and Cason’s (1994) Nature of Human Capability model, which focuses on the complexity of mental processing. According to this model, there are four approaches to human information processing:

The four cognitive approaches specified, and the structure of the information capitalised on, are linearly linked to the levels of work as specified by the SST. The first four levels of the SST are linked to the first four processing approaches using symbolic-verbal information, and the SST levels five to eight (as the SST model does go up to eight instead of seven in some formulations), involve the application of the same four processing approaches using abstract conceptual information. Jaques and Cason’s research has shown that the category of complexity of mental processing is a valid method of measuring an individual’s potential to deal with various levels of work complexity. 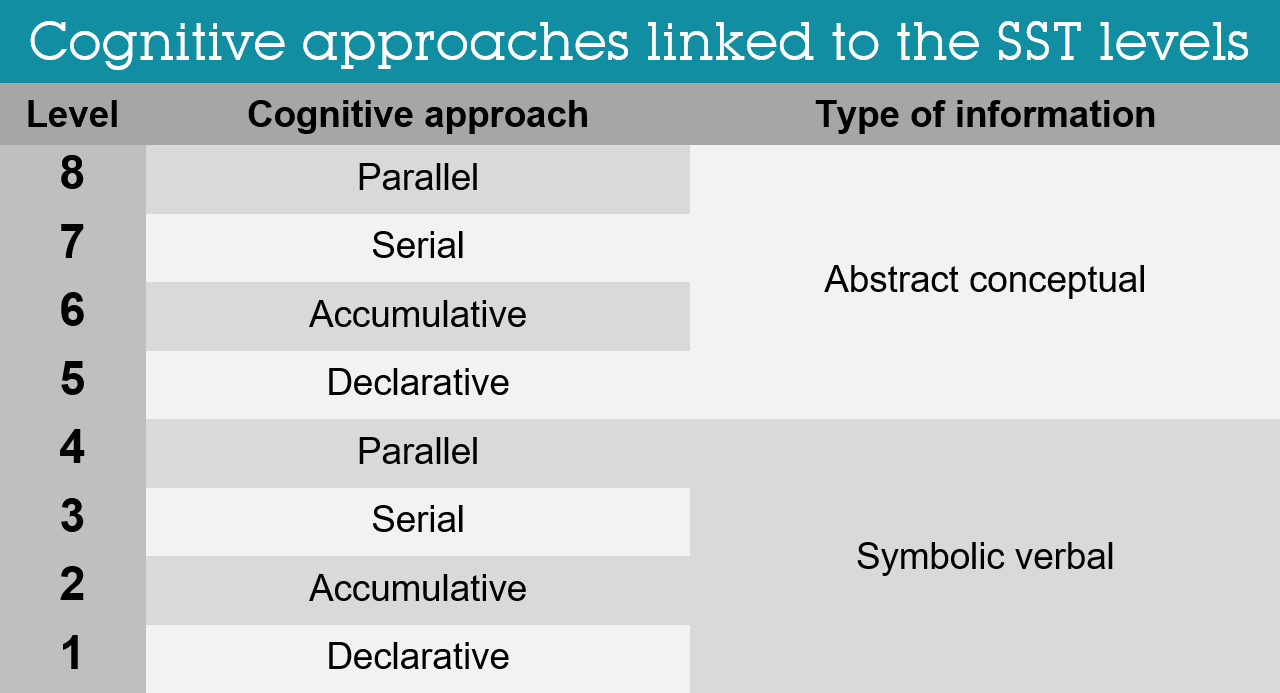 Jaques (1996) makes specific statements to define what decision-making is in RO theory. He points out that decision-making involves uncertainty. If all the reasons for a certain decision can be stated, he regards it as a calculation. Decision-making thus involves never being sure that you are right. This also means that it involves information that you cannot be sure about because the information is vague, incomplete, irrelevant or excessive in quantity.

The development of the scientific management methodology

In the 1950s, Jaques consulted for Glacier Metal Company and this resulted in a body of work called the Glacier Project Papers by Jaques and Brown (1965). His work during this time resulted in many of the insights he formalised later into the SST and RO approach.

Jaques speaks about the steps he took to developing RO in the Harvard Business Review article called “In Praise of Hierarchy” (1990) and he does warn against using one part of RO theory without other aspects. The steps he described are very briefly summarised here:

They point out that if people’s capability and work complexity are matched effectively, it has the following benefits:

The theory has also been adapted and developed to suit a variety of companies’ and consultants’ needs.

A variety of SST assessment techniques for both individuals and roles have been developed.

In Requisite Organization (1996), Jaques objectified the process of evaluating the complexity of discrete tasks by means of the following steps. Firstly, it requires the specification of the intended output, using task-target-completion time (by-when). This is followed by an analysis of the work that will be required to achieve the required output. To achieve this, he specified the criteria by which the work can be categorised in terms of its level of complexity. For example, Stratum 1 work is characterised by following a specific plan to achieve an identified goal; Stratum 2 requires the accumulation of data and a diagnostic judgement, etc. Finally, the level of the project is allocated to reflect the most complex criterion which applies.

Alternative SST job evaluation systems aimed at analysing the complexity of work, such as the Contextualised Competency Mapping (CCM) of Cognadev, are also available.

In terms of people assessment some approaches are insightful and offer value, whereas others merely measure intelligence quotient (IQ) or ability test constructs and then link the output to SST levels as an afterthought. Jaques (1996), however, rejects the application of IQ test ratings in identifying the most suitable level of work complexity for a person. Only assessment methodologies that measure Jaques’ constructs (or approximations of them) will be discussed.

The Cognitive Process Profile (CPP) by Cognadev measures the complexity preferences and capabilities of people. The CPP is an automated simulation exercise which externalises and tracks thinking processes according to thousands of measurement points, the results of which are algorithmically analysed to indicate a most suitable level of work complexity, the persons cognitive style, their information processing competencies, learning potential and cognitive developmental needs. Cognadev’s unique approach to measuring complexity is discussed in “What is the Information Processing Model (IPM)?”

One of the most commonly applied assessment techniques in this regard is Gillian Stamp’s (1984 in Lewis, 1993) Career Path Appreciation (CPA). The CPA is a structured interview technique, aimed at evaluating the level of complexity a person is comfortable working at. According to Stamp, both work and the human capacity to master that work are hierarchically stratified, where higher levels entail greater levels of complexity.

Stamp’s structured CPA interview technique consists of three sections: phrases, symbols and work history. The interviewee selects from nine sets of six phrase cards those that best describe their approach to work and then elaborate on that. A card sorting task using geometric symbols requires of the test candidate to discover a sorting rule. This card sorting task informs the stylistic preference of the candidate. In the work history part of the interview the candidate provides a chronological description of past work assignments; their experience of the associated levels of challenge involved and the time span of these tasks.

The CPA yields an indication of a person’s work progress – both their current as well as their future work capacity, the latter which is referred to as “mode” by Jaques (1989). The mode is determined according to empirically derived age-related progression curves which are graphically represented.

In terms of the validity of the CPA assessment process, it seems that the CPA result is affected by interrater reliability (the subjectivity of the interviewer); the verbal skill of the interviewee; and the degree of rapport between the parties. Another factor that may skew the results is that candidates may, in hindsight, justify or exaggerate their past career-related achievements. These factors may significantly affect the validity of the CPA and other interview-based assessment results.

Regardless of any criticism, the SST model as well as the CPA and similar SST-based interview techniques are widely used for job- and organisational structuring purposes as well as people-job matching, succession and remuneration initiatives.

This blog is part of a series on models of work complexity, which includes “What is the Information Processing Model (IPM)?”, “What is the Viable Systems Model (VSM)?” and “Models of Work Complexity: a comparison of the IPM, SST and VSM”.

“In Praise of Hierarchy” is an article (1990) that Elliott Jaques wrote for Harvard Business Review (HBR), which focuses on briefly explaining RO and how it was developed. Jaques’ step-by-step explanations make his reasoning easy to follow. Jaques also wrote “Taking Time Seriously in Evaluating Jobs” for HBR in 1979.

For assessment methodologies, you can read more on Cognadev’s information processing approach to measuring the cognitive complexity preferences and capabilities of people. The specific assessments for individuals are the Cognitive Process Profile (CPP) and Learning Orientation Index (LOI). The Contextualised Competency Mapping (CCM) tool is used to assess the level of complexity of a role or position (amongst other things).